I lost a poem.
Ever had the feeling?
“Maybe under the bed.” I say aloud.
Perhaps tucked into a unnamed file
or in the car. Could it be in the driveway or
by the landing to the porch?
Nothing.
The coffee shop!
Racing up stone steps past professors
sipping on herbal teas. A quick look around,
an admittedly too loud, breathy conversation
with the barista and I’m back at the door with
my head hung low.
What if it was the greatest poem I’ll ever write?
It certainly had that feeling of grandeur.
Those lines came out of me like water in a broken
basin. The lost poem had better metaphors than that.
“The Lost Poem” it already has an epic name that will
haunt my mind for decades to come. Some nobody will
stumble upon it years from now. It will blow in from the
east and crinkle against his heel. He will snatch it from
the ground and his eyes will light up and he will know
what to do with a poem such as this! Claim it for himself.
His popularity will rise and I’ll be the guy penning greeting
cards for the company that swallows up hallmark. Face
cards, a Facebook company using Google imaging
software. I will be at my lowest point when I find my poem
posted on newsfeeds by hip twenty somethings that have
a catchy name we haven’t even come up with yet.
At first, I’ll want to reclaim the glory that is rightfully mine,
but that will fade. And I’ll shrink back into the hole I call
a home, never to be heard from again.
Many years ago I lost a poem.
But you already know what it says. 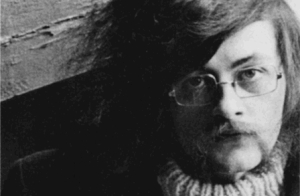 “The window’s colors coil and unravel, snakes moving through smoke … and looking into your eyes I see a pollen-dusted pond shaken with silver rings before the storm begins.” – Thomas James

Imagine with me, a concrete feathered bird.
He stands on two legs looking up
at the other birds flying through the air,
landing on telephone wires, leaping off and soaring.

Now, this bird often runs to the edge of the hill –
flaps his cumbersome wings as hard as he can,
and hopes beyond hope that today will be different from all the
other days – only to realize … that it’s not.

A bird that cannot fly? Woe is the day.
Better not to live than to continue on like this.
The little bird cannot bear to keep going with
such a great burden bringing him down.

The next day he wakes up and practices again.
Day after day he sings the beautiful song
from the ground and watches
his feathered brethren dance through the skies.

It has been months that the concrete feathered bird has been singing.
The other birds start to leave their church steeple perches,
to circle him on the ground and listen.
They love to hear him sing.

I am that concrete feathered bird
and while I have had flight stripped from me –
and watched from the ground in silence for years –
You will know my song. 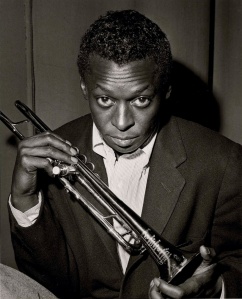 So I’ve been listening to Miles. You might know him as Mr. Davis or the coolest cat in the room. Any room. Smooth as can be while his man tickles piano keys. He is jazz music personified. Now, if an artist is simply a mirror of the style and mood of his time, then take to that smoky bar circa 1959. I’ll pull up a chair stop and stare at a man in his prime. Improvised. And it was televised while he let that trumpet slide. Right on down the street to where star crossed lovers meet to the sound of the beating heart and say they’ll never part. Long as that music pours from the Victrola in the store window and that solo crescendos and junkies smoke that endo around the back of the club. Hoping to get some love from lady day waiting in the wings for her swan song to sing.

I’ll bet if u step on certain floor boards in those boarded up New York City speakeasies a little jazz will come whispering out. Of this I have no doubt.

And I’ve fallen in. Choked on blue notes for breakfast. Tubas at tea time. Clarinets at siestas. And now creole señoritas speak to me with half open eyelids. Batting and beckoning me to dance. When life extends you a hand, you take it. And dammit you dance and dammit you sing and dammit you shake and dammit you’re King. If only for a night. The Sultan of the speakeasy. Jack of all trades. A royal flush that is dressed in spades.

Miles understood till the end of his days. Understood it when that baseline came in. When the piano took second. Understood the contradiction. And when life did beckon. He grabbed it quick by the hand and never relented.

Now I went to one of these prohibition saloons. I scrapped the boards with my fingernails. I pressed my ear against the wall and you know what I heard?

I guess it wasn’t worth saving.